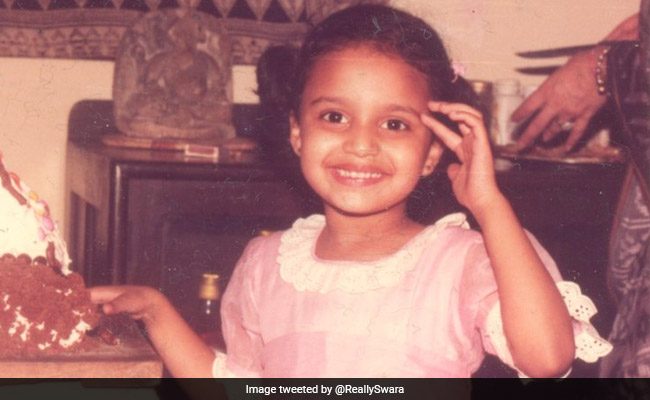 Swara Bhasker has had the last word in the controversy over joking about a child artiste who called her ‘aunty.’ Pilloried on social media after referring to said child artiste in less than seemly terms, the 31-year-old actress took a sly dig at the backlash she has received in the last few days with a Children’s Day post on her ‘bachpan ki sabsey badi learning.’ It is this: “Ma kehti thi gaali dena buri baat hai. Ab samajh mein aaya (Mother taught me that swearing is bad, I understand that now). Love and respect to all kids out there. May you grow up and not become zaroorat se zyada ch**** adults. I meant “chatur” – aapne kya socha?” Lest trolls take her literally at her word – the word being ‘ch****’ – Swara added a PS: “Dear trolls, yeh bhi joke tha.” See Swara Bhasker’s tweet here:

The Internet exploded with righteous indignation last week after Swara Bhasker appeared on comedy chat show ‘Son Of Abish‘ where she related how outraged she was when a four-year-old co-star called her ‘aunty’ while filming an advertisement. Twitter was twice as outraged as she, not because the child artiste had aunty-ed Swara but because she used cuss words to refer to her young co-star.

Speaking to news agency IANS later, Swara Bhasker noted that she was on a comedy show and her words, though ‘ill-advised,’ were meant as a joke. “I was on a comedy show, narrating a funny incident about my first experience shooting in Mumbai. In that partly exaggerated and satirical narration, where I was using a comedic, adult and self-deprecating tone, I used certain swear words,” Swara told IANS, The whole controversy was clearly targeted and constructed. I’m not trying to justify swearing. Those were undoubtedly an ill-advised choice of words, but they were not seriously used. It was said jokingly and self-deprecatingly. Comics do it all the time without anyone blinking an eyelid.”